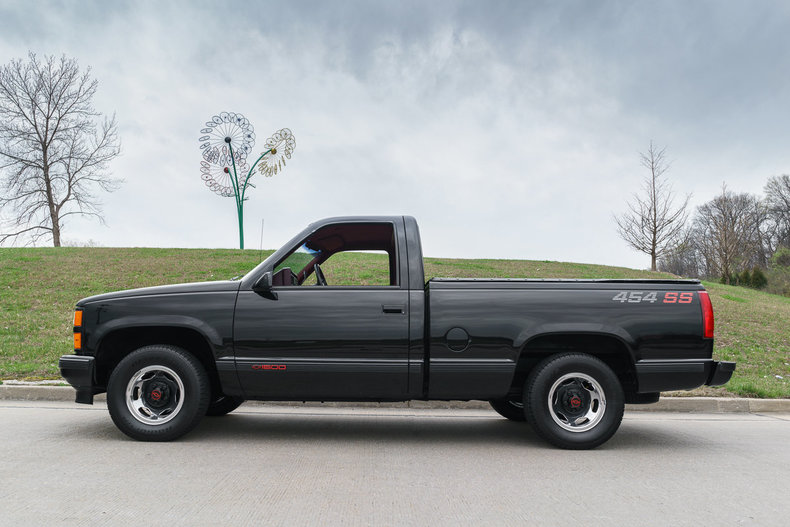 In a sport truck segment long removed from its biggest household names, enthusiasts no longer have a plethora of options to satisfy their performance desires.

Sure, the demand for a next-generation sport truck may seem widespread if you read the yearly pleas from automotive publications. But the sad truth is manufacturers aren’t going to waste their time meddling in a niche segment with low projected sales numbers.

With dealership lots out of the question, sport truck enthusiasts are forced to look elsewhere. You can try your luck with Craigslist, but odds are you’re going to find a lot of modified pickups that have been driven hard and put away wet.

That’s where we come in. If you’re looking for a truck capable of hauling a lot more than cargo, look no further than our 1990 Chevrolet 454 SS with only 43,750 original miles.

In a sea of Ford Lightnings and Dodge Rams, this Chevy is sure to stand out from the crowd. It’s onyx black paint, lowered suspension and wide stance give the 454 SS a menacing appearance. If the Buick Grand National was built to be Darth Vader’s weekend toy, then the 454 SS was purposely designed to haul it to the track.

Plush Garnet Red cloth upholstery and high back bucket seats spruce up the interior, while Bilstein shock absorbers and a fast-ratio steering box dramatically improve the ride and handling.

You don’t have to search long to find the appeal of this sport truck, as it’s easily found in 454 cubic inches of iron beneath the hood. Yes, just like the infamous Corvettes and Chevelles that came before it, now you can enjoy Chevrolet’s iconic big-block V8 in a regular cab, short-box pickup. Though the carburetor may be long gone, its legendary performance still remains.

The introduction of the 454 SS marked the first time Chevrolet’s big-block V8 from its full-size truck lineup would be available in a C1500. At the time of its release in 1990, news of the 230-horsepower sport truck certainly caused quite the commotion. But it was the engine’s herculean 385 pound-feet of torque at only 1,800 rpm that told the real story.

With a three speed automatic transmission paired to limited slip differential and 3.73 gears, the 454 SS was capable of leaving a pair of black stripes even longer than its big-block predecessors. Zero to sixty rushes by in under eight seconds, which was Mustang GT territory at the time.

With just under 17,000 units sold during its four-year production run, finding a pristine unmolested example is becoming an impossible task. With today’s sport truck segment near extinction, the appeal of 454 SS continues to grow and prices continue to climb.

If performance with a pickup bed is what you seek, don’t hesitate.  If I’ve learned anything in the eight months I’ve worked here, it’s that trucks in this condition don’t last long. Come to Fast Lane Classic Cars today for your test drive.